How to Identify Gold: 13 Ways Tell You If Gold Is Real and Avoid Fake Gold

“Gold is the corpse of value”⋯ Neal Stephenson.

The above quote is a simple yet succinct summary of what gold has come to represent both in ancient and modern society. Gold is symbolic of value both literally and metaphorically. At a current price of about $1,300 per ounce, gold is one of the most expensive substances on earth.

The business of selling, purchasing and processing of gold into jewelries and other materials has grown into a very profitable industry. China (14%), Russia (9%) and Australia (8%) are the top three producers of raw gold bullion which is the raw material for producing jewelry.

These three countries and others have a total world production value of $119billion. This value was in 2014 according to bullionvault and has definitely increased in recent years. Unfortunately, the profitability of this business has also attracted the attention of dishonest people. These criminally minded individuals have learnt to combine various inexpensive metals and coat them to have the appearance and shape of pure gold. 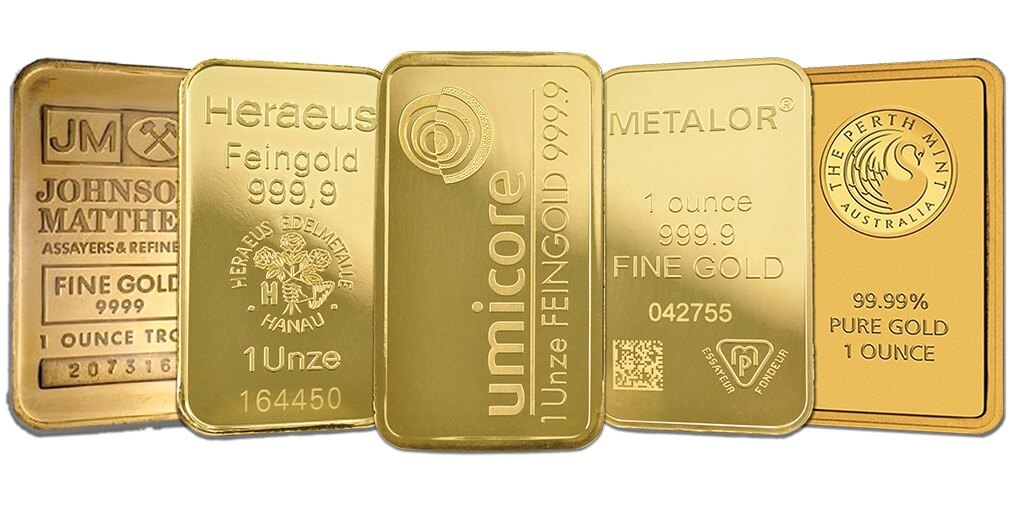 Many people have unwittingly become victims of these criminals, losing vast sums of money as payments for “original gold jewelry products”. The advent of technology has made it seemingly easier for these forgers to carry out their trade. Despite all of this, there are still some subtle methods by which fake gold can be identified. This article will give you basic tips and pointers to quickly identify fake gold and differentiate it from the real thing.

In identifying fake gold, an important starting point is to gain knowledge about the different types of gold jewelries. To the untrained eye, all gold products are the same and differ only in the color due to finishing applied. There are however more subtle differences in various gold products which we shall discuss shortly.

The first classification is based on time in which we can divide gold into new, old and fake gold.

What’s the harm of using fake gold to make jewelry?

Using fake gold in the production of jewelry is often accompanied by some consequences capable of destroying the reputation of the business.

The following are some of the embarrassing things that occur in different processing plants when fake gold is used:

How to Identify Gold

Avoiding fake gold products may seem very difficult due to the advanced technology being used by counterfeiters. There are however ways known to experts about how to identify fake gold and stay away from it. These include basic methods such as:

Compare the advantages and disadvantages of these 7 professional methods

Considering price, accuracy and speedy testing, XRF gold analyzer will be the best choice to analyze gold content for gold dealers and jewelry business between them

Conclusion: How to Avoid Fake Gold

The proliferation of fake gold is a serious threat to the success of all stake holders in the gold and jewelry industry. As formidable as the problem seems, there are still ways to circumvent the efforts of gold fakers and forgers.

This article has extensively gone through a number of concepts. Such as various types of gold and the various dangers or disadvantages of using fake gold.

Various common and advanced techniques of identifying fake gold have also been discussed. Gold dealers and manufacturers can significantly lower the risk of getting duped and losing their reputations by following the steps outlined above.

There are two methods of gold casting. These include:

The need to identify genuine gold from fake arises due to uncertainty about the source of gold. In a bid to cut costs and make unnecessarily high profits, gold dealers fall into the hands of counterfeiters. Their offer of lower costs trick unsuspecting dealers to purchase fake gold from them.

Dealing with unconfirmed dealers is what gives rise to coming in contact with fake gold. To avoid these nefarious elements, it is advisable to deal with reputable and well establish gold companies. Some of the big names in the gold dealing game include:

So dealing with reputable companies is a very wise choice to avoid fake gold.

The most popular SuperbMelt precious metal analyzer on the market 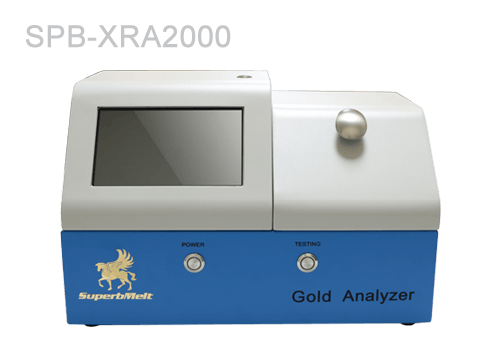 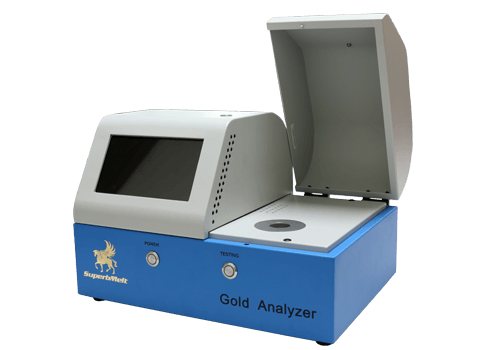 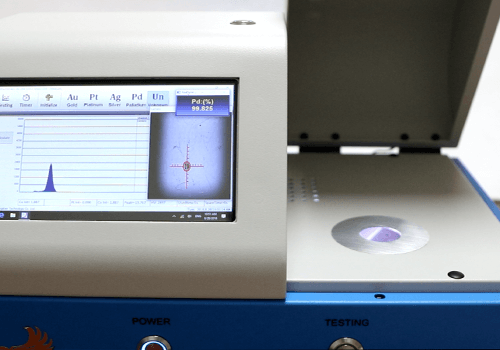 Get A Quick Quote

The XRF Gold Analyzer is widely used for the analysis of precious metal purity, authenticity and metallization thickness.

The XRF Gold Analyzer can accurately analyze the purity of four precious metals: gold, silver, platinum and palladium, analytical tolerance range is 0.01% to 0.3%.

It can also test what kind of metal this is (except for Au, Ag, Pt, Pd, which cannot be tested for metal purity).

Parameters
Features & Benefits
Parameters
Features & Benefits
□ All-in-one and Wireless Access: The machine and the controlling computer are combined together, which is simple and concise. Its compact, portable, space-saving, streamline body designs with high quality make it an excellent value of long-life usage and low maintenance. Supporting Wifi allows it to be convenient for us to remote control. □ Accurate (Analysis Results Close To Fire Assay Results): Using unique optical technology and calculation method to ensure analysis results close to Fire Assay. Analytical tolerance range is 0.01% to 0.3%. □ Multilevel Protections from X-ray: Using unique design to seal x-ray in the chamber totally, making sure the operators’ safety. There are multilevel safety protection systems. □ USB Interface and DC 12V Power Supply: It is very convenient to connect external equipment with USB interface, such as printer, keyboard, and mouse. It can be charged with vehicle power supply and battery. It is available to use it outside. □ Completely Intelligent Analysis: The operation is very simple. And it doesn’t require the operator to have professional knowledge. The operator just needs to put the sample on the measurement window and click “measurement start” without choosing the working curve or calculate method. Then the intelligent analysis system will report the sample purity automatically. □ Less Standard Samples for Calibration: All XRF analyzers need a certain quantity of standard samples for calibration to ensure the accurate analysis. Our analyzer only needs several samples for calibration and gives perfect results close to Fire Assay. □ No Restriction to Samples’ Size and Shape: With small X-ray spot, it can test samples of different size and shape, even when the sample is a pin. It also supplies average function so that customers can be easy to get big sample’s results, such as gold bar. □ Unique Parts Protection System: Having unique technology to protect important parts and keep their lives longer. □ Rapid Analysis: Only taking several seconds to get accurate results. □ Visible: There is a camera in the analyzer, so customers can see X-ray spot position from computer screen. And it is easy to print report with analysis point photo. □ Innovative Ideas: Many innovative ideas are integrated into hardware and software, so we have many utility functions to meet different customers, requirements. But our innovation is always plagiarized by some competitors. 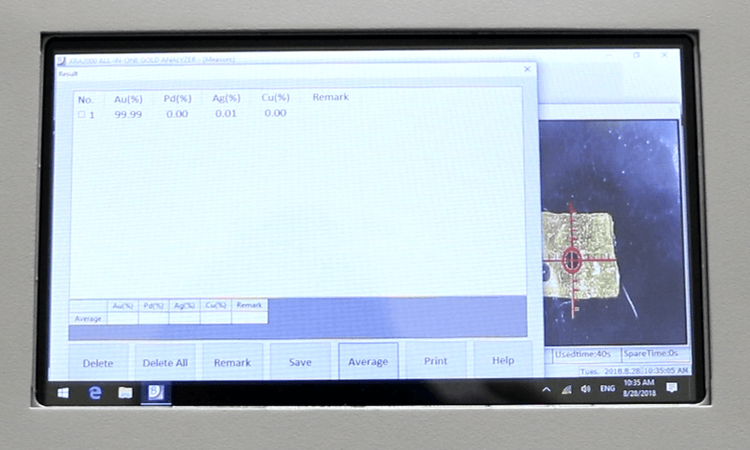 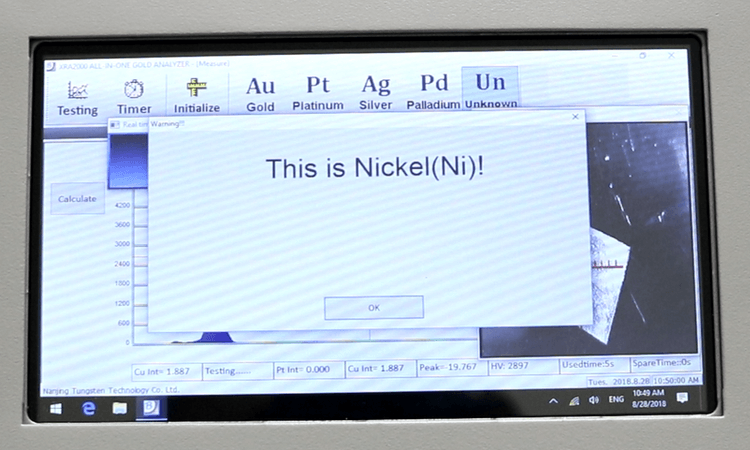 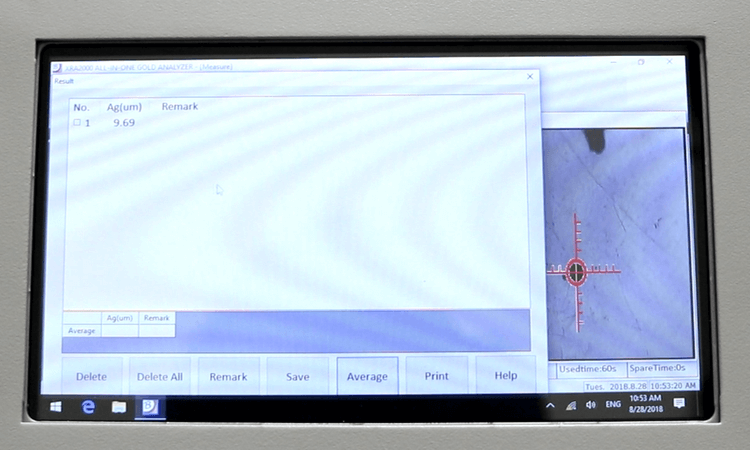 Testing the thickness of metal coating